Your Support Makes A Difference

The Triangle Spokes Group cannot make the dream of a bike come true without the tremendous support of the Triangle community. From donating a bike, organizing an event, volunteering at an event or just helping us spread our message we need and appreciate your support! Please share this flyer with friends, family, co-workers and all potential supporters so we can exceed our goal of 350 bikes this holiday season!

Are you looking to donate gently used bicycles in Raleigh, Wake Forest, Cary, Chapel Hill or Durham? Triangle Spokes Group only raises funds to purchase shiny new bicycles, however we have great partners in the community that will accept your gently used bicycles. Click on the images to learn more about each of these organizations and how to reach them. 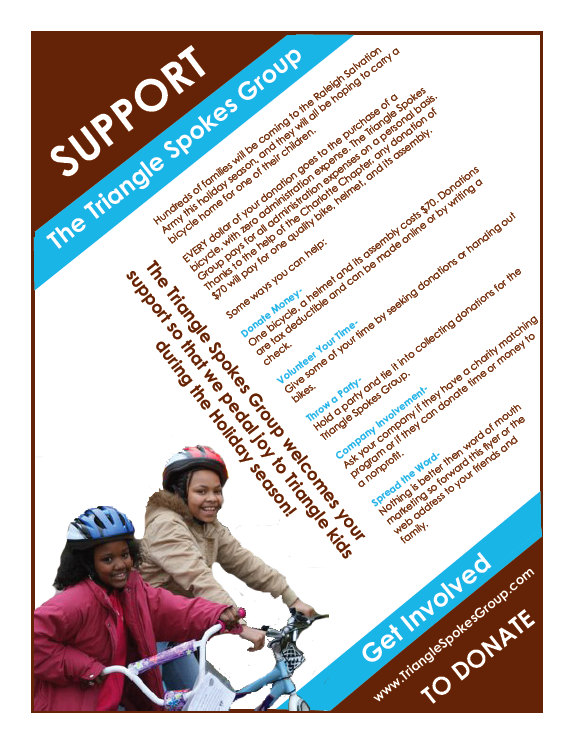 The Triangle Spokes Group encourages you to share your stories with us and others visiting this site. Contact us to send in your stories. We appreciate your support!

It just so happened that Kay had a special interest in the group. Kay Lavelle, Sales Director for Biltmore Homes, works closely with Ashley Wilson and Jenn Nowalk at Heritage Wake Forest and explained to her 87 year old mother who the girls were. Her mother was intrigued by the connection.

They discussed the greatness of paying it forward and Mom Mom commented that she had been torn over what to buy her 13 great grand children for Christmas this year. She told Kay that this year she wanted to donate a bike in each child’s honor to the Triangle Spokes Group. She wanted her Great Grandchildren to understand what it meant to pay it forward and give back and a young age. They were not in need of any toys or clothing, so giving to another child was a perfect holiday gift for them.

Only a few days later after this discussion, Mom Mom died in that same chair on December 3, 2007. Kay found her sitting peacefully. Kay still donated all 13 bikes in honor of all 13 great grandkids and in memory of Mom Mom. Triangle Spokes Group thanks Kay Lavelle and Mom Mom and their entire family.

Kim was touched by the story she saw in the N&O about the Triangle Spokes Group. Her husband, Steve, is an avid cyclist and his birthday was approaching and Kim thought that she throw him a surprise party. The perfect idea hit her after reading the story – have all of the guests make a donation to the Triangle Spokes Group in Steve’s honor in lieu of presents and then present it to him at the party. Steve was blown away by his friend’s generosity that they raised enough money for more than 10 bikes! This was a gift that was larger than him and could be enjoyed by so many children so they could experience the joy that cycling brings to his life!

Sean and Kristine Gill were eager to start a new tradition of a Kentucky Derby Party. Besides bringing friends together for the fun event they wanted it to be something that could become a tradition that was focused around giving back in someway. Well they came up with an innovative plan to auction off each Kentucky Derby Horse entered into the big race for a minimum bid of $20. The horses that were favorites wound up going for much more than that. They decided that half the money would go to the winning horse owner and the other half of the money would be donated to the Triangle Spokes Group. The event was a huge success as they raised over $200 for the Triangle Spokes Group and now have an event they plan to keep going for years to come.

I walked into my children’s daycare and noticed pictures of a mother and four children on the bulletin board only to find out that the mother recently died in a car accident. She was a single mother and Christmas was approaching. I felt tears fill my eyes…trying to imagine what life would be like without a mother for these precious children. I talked to one of the managers about the family, trying to find out what I could do to help and all they were asking for were the essentials…food and clothes. I found out they the children had very few toys and the smallest girl was found playing happily with rocks in the driveway of her grandparents house. I also found out they the children had a bike that was held together with a piece of wood because the metal had rusted. At that point, I knew there was someone who may be able to help provide a bike, so I contacted Jen and Ashley.

I was fortunate enough to be able to go with the managers of Primrose School of Heritage to deliver Christmas. It was very humbling to watch the family receive gift wrapped presents and boxes of food. They were very excited to find out that there were some special gifts given to them out of love, including two bikes for the girls to share. Nothing could possibly take away the pain they felt or the fact that there mother would not be with them that Christmas…but I know for certain that this family felt surrounded by many people who care. I am thankful for the Triangle Spokes Group and their donation of these two bikes to this special family. Their Christmas was a little brighter because of these gifts!

A special thank you to our gracious partners that have supported our efforts throughout the years, helping us achieve our goals! 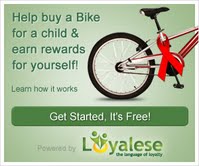 New Belgium Brewing. As our aspiring young home brewer rides his mountain bike with “fat tires” through European villages famous for beer, New Belgium Brewing Company was but a glimmer in his eye. Or basement. For Jeff Lebesch would return to Fort Collins with a handful of ingredients and an imagination full of recipes. And then there was beer!

The Elon University Triangle Chapter page has chosen Triangle Spokes Group as its officially charity. Along with supporting our events, The Elon Chapter has really made a difference in the Triangle community. Log in and join the Triangle Alumni Group! It is your best source for chapter contacts and events. Go Elon!

Homes By Dickerson, It is understood that each staff member at Homes By Dickerson plays an integral role in providing and maintaining the commitment to craftsmanship, quality and service at Homes By Dickerson. We are made up of dedicated professionals that not only work directly with each customer, but also work with one another to achieve the most quality-built, custom home that each person involved is proud to be a part of.

Klausie’s Pizza is handmade, square pan pizza by the slice. Made from an original recipe, Klausie’s slices are served straight out of the truck: piping hot, with cheese all the way to the edge.

E Design is a great friend and partner to the Triangle Spokes Group. They are a small (but spunky) design shop specializing in corporate and not so corporate design projects. Check out their portfolio as it speaks for itself!

Fruition Film, producers work with each client to budget projects within their means and tailored to their purpose–from broadcast productions to webcasts. We own and maintain the highest quality equipment and are affiliated with top-notch professionals in every trade.

Get in Touch. Get Involved.

Please feel free to contact the Triangle Spokes Group with any questions, donations, ideas, thoughts or interest in volunteering.